Microsoft Is Dead And Here’s Why 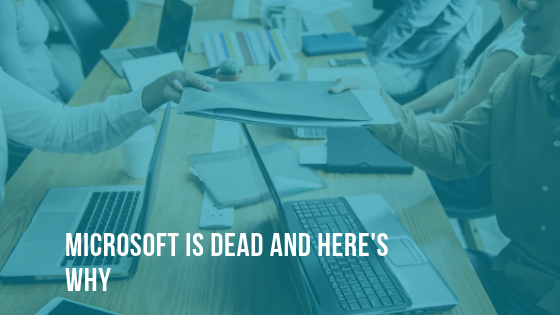 Microsoft won’t let you forget that they make software –  Splash Screens EVERY time you open Office applications to continue to brainwash people.

They already lost the battle of the web browser – feels like they are already grasping straws https://www.cnet.com/news/microsoft-rebuilds-edge-browser-on-chrome-tech-google-gains-web-power/

For nearly as long as Microsoft Office has existed, other competitors and open source products have been bringing the compatibility similar to Office.  Including the OpenOffice project by the Apache Software Foundation that has been offered as an alternative desktop apps on Mac and Windows for 6 years.

A word document is a simple text document with proprietary formatting embedded in the .docx file types.   The only magic that Microsoft contained in those documents is formatting to stay proprietary. This ensures when another Microsoft user opens it, it’ll looks the same.  In essence, it’s a ploy to increase Microsoft software revenue. Unlike Adobe in the 1990s who made the .PDF specification for free so at the time (of Lotus Notes, Microsoft, WordPerfect) we could fix a simple issue – to present a document independent of specific software or specific system.   Microsoft had owned the space of editable documents for over a decade.

Up until recently, the convenience of having Microsoft Office installed on your computer was not worth the quirks of open source software to most professional office staff.  In some industries when you are using G Suite too, that you may continue to use Microsoft Office, especially when working with external members who still use it.

We know it’s scary, but you can live without the Ribbon Bar.   Starting in Microsoft 2007, Word, Excel and PowerPoint included a major interface change along the top bar known as the Ribbon Bar.   It makes it easy to spot settings that used to be buried deep in the menu. Almost any alternative to Microsoft includes the same features but may not be in the same location, use the same icon or make it nearly as apparent for new user’s to jump in.

Think about it for a second, why do you use Microsoft Word to edit a document or Excel for spreadsheets?   For most people, it’s what they learned how to use and what their colleagues use. Today, over 80 million students are utilizing Google Docs, Sheets and Slides in classrooms. Over 5 million business use G Suite to run either operations. If you are a business which relies on young talent, collaboration intends to leave a lasting mark on your industry, it’s probably worth looking at the alternative.  At RCN Technologies, we specialize in getting you up to speed quickly and support your staff through the transitional. In our experience, we find the learning curve is marginal and impact to collaboration when fully embraced can be exponential.

As Microsoft phases out Windows 7 in January 2020, they have indicated they will begin to transition their licenses for business systems that run Windows as a Service (WaaS) model similar to Office 365 (Saas). Your next Windows computer will include a perpetual license but it may be the last. If you have ever wondered why a Chromebook is typically half the expense of a Windows computer, you might consider how much that Microsoft Operating System is actually costing.

The perpetual license will soon be a thing of the past, Microsoft will continue to transition their software products over the next couple years. Microsoft has announced an 18 month life cycle for Windows products indicating a faster pace than they have held in the past. We should have Windows 11 soon. That can be exciting, we know their new versions always go over smoothly right?……

What does the cloud mean to you?

First versions of the Cloud were typically referred to as just someone else’s server. It allowed companies, for a small monthly fee (instead of investing in hardware), build virtual servers in the cloud that can run their applications.  Compared to an On Premise server, it allows more scalability and reliability. The majority of small businesses who embraced the cloud early on and today, transition their existing desktop apps and Microsoft workflows to hosted computers.

The modern cloud’s greatest achievement is the increased interoperability, the ability of computer systems or software to exchange and make use of information.   This modern “Cloud” is different, built upon micro services, it eliminates a central server or operating system to accomplish the individual services needed.  For example, most applications rely on a database that needs to be hosted and the ability to present that data in a user interface. Instead of a single operating system running database services and a front-end engine, these services are running individually.  This allows software developers more control over resources, scale and security. Micro services are more efficient and cheaper to run.

The down side of the Cloud is the ongoing expense, its your new utility bill.   That’s why it’s wise to evaluate this decision thoroughly before jumping in.

Why do we need the cloud?

Why G Suite and Why now?